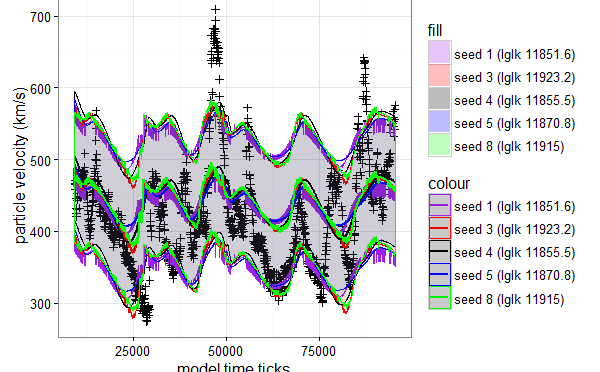 Model and its parameters

The model has the following parametres:

The overall average solar wind velocity at arbitrary distance from the Sun (x) at arbitrary time moment (t) is the following.

The model time resolution is one minute. Thus 1 model time tick is 1 minute of real time.

The maximum coronal hole relative area can be 20% of the visible Sun area.

Reference observations of solar wind velocity start little bit later to wait until first bursts reach the Earth. Thus references observations are per hour observations of 2015 year (between 150 and 8000 hours from the beginning of the year, which is about 7 January 2015 – 30 November 2015)

I consider that 5 days since the first bursts are emitted is enough to establish continuous flow of bursts at Earth distance.

I did several runs of model parameter fitting using MCMC fitter developed in MSR Cambridge in collaboration with our lab.

I will evaluate 5 parameter sets that gave the maximum likelihood of observed values (MLE).

The following figure demonstrates five fitted functions of velocities that give maximum likelihood. If we draw simulations using the functions above we get As a result, even without explicit evaluation of error rates it can be seen that solar wind computational model behaves poorly for now. Simulated solar wind varies significantly less in magnitude than real wind measurements.

It can indicate that the model miss some important features. It stops the fitter to reduce noise and fit the variability better.

I can foresee the following causes of poor fitting:

You can reproduce the experiment using docker: “docker run -d -e seed=1 dgrechka/solarwindmodelfitter:0.3”
In addition the latest docker image of the fitter is here.

This is a part of large solar wind prediction experiment, which I describe in a separate post.